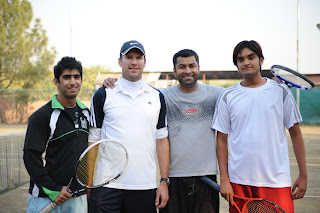 December 24, 2011 - Islamabad, Pakistan
Sports have for long been an arena of international relations where countries who might otherwise have differences can put them aside for the sake of common cause. Anyone who reads the news knows that 2011 has marked a low point in Pakistani-U.S. relations. On a warm Saturday afternoon, the day before Christmas, a group of Pakistani and American tennis enthusiasts put politics aside and came together to enjoy an afternoon of camaraderie and sport.
During my six months here in Islamabad, I have found that a great outlet for any pent-up energy has been to go out and hit the fuzzy yellow ball a few times across the net. It clears the mind and keeps the body sound. I've been fortunate to find a solid community of a dozen or so players within the embassy of varying skill levels who share my passion for the game.
One Saturday in late December, thanks to the initiative of the Embassy's tennis pro Imtiaz Khan, our small contingent of tennis enthusiasts welcomed a delegation of youngsters, adults and coaches from the Pakistani Tennis Federation to the grounds of U.S. Embassy Islamabad for an afternoon of tennis. 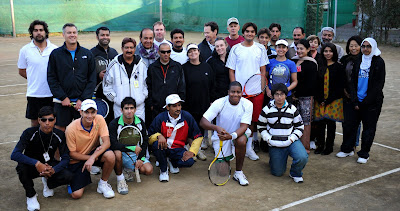 The event was a huge success; we mixed up the teams into doubles pairings, one team of one Pakistani and one American playing against another team of one Pakistani and another American. In the first match I picked my partner wisely - Chaudry turned out to be the #5 men's doubles player in Pakistan. We pulled out four in a best-of-seven game series against the embassy's top racket (Haroon Ullah) and his Pakistani partner, a 17-year old junior who is likely going to the U.S. next year on a full tennis scholarship. It had been a while since I'd played with 5+ players, but it was exhilirating. Haroon later took his revenge by pairing up with the coach's son, a lanky 19-year old with a picture perfect one-handed backhand that seems to be a trademark of the Peshawar school of tennis.
The day went on and we continued in a round-robinesque format, and even had a battle of the sexes match later on in the day. I informed our opponents up front that this wouldn't be the first time I'd lost a tennis match to a girl (it was a common occurrence during my two-years in Ukraine).
As the time come to bid our guests farewell, we all shook hands and thanked them for coming, opening the door to future get-togethers and wishing the youngsters luck in their endeavors. I tip my hat to my colleagues and to our fellow Pakistani enthusiasts for their sportsmanship and sense of fair play. I also acknowledge Coach Imtiaz Khan and his incredible staff for putting together such a great event; keep up the great work, and I look forward to the next one.
Photo credits: Sadia Niazi
Posted by jedwardwolf at 6:45 PM